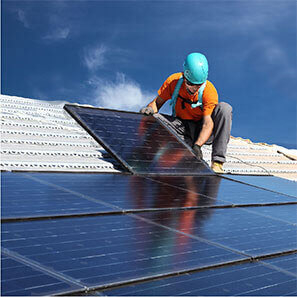 WHAT IS A SOLAR CELL?

WHAT IS A SOLAR CELL (PHOTOVOLTAIC CELL)?

Several situations can be observed when light falls on a photovoltaic (PV) cell, also called a solar cell, this light can be reflected, absorbed or passed through the cell. PV cell consists of semiconductor material; “Semiconductor substance” means that it can conduct electricity better than an insulator, but not as well as a good conductor such as metal. There are several different semiconductor materials used in PV cells.

When the semiconductor material is exposed to light, it absorbs the energy of the light and transfers it to negatively charged particles in the material called electrons. This extra energy allows electrons to flow through the material as electric current. This current is extracted via conductive metal contacts, which are grid-like lines on a solar cell, and can then be used to power your home, facility, and the rest of the electrical grid.

WHAT IS A SOLAR PANEL?

Solar panels are energy sources used to absorb the sun’s rays and convert these absorbed rays into electricity.

A solar panel is actually a collection of solar (or photovoltaic) cells that can be used to generate electricity through the photovoltaic effect. These cells are arranged in a grid-like pattern on the surface of the solar panels.

Therefore, it can also be defined as a series of photovoltaic modules mounted on a structure that supports it. A photovoltaic (PV) module is a packaged and connected combination of 6×10 solar cells.

When it comes to wear and tear, these panels are quite durable. Solar panels wear out extremely slowly. In a year, their effectiveness decreases by only one to two percent (sometimes even less).

Most solar panels are made using crystalline silicon solar cells.

Installing solar panels in homes helps combat harmful emissions of greenhouse gases and thus is of great importance in reducing global warming. Solar panels do not cause any pollution and are a clean energy source. They also reduce our dependence on fossil fuels and conventional power sources.

As it is known, solar energy is one of the cleanest renewable energy sources. So how is energy produced from the sun? Solar energy is produced in solar power plants thanks to solar panels. Solar power plants (GES) are power plants that convert energy particles from sunlight into electrical energy. The panels used in SPPs are quite large and there are photovoltaic cells in these panels. The main material of these cells is gallium arsenide and crystalline silicon. The lights coming to the solar panels are converted into electrical energy thanks to the panels and stored in large solar cells or batteries. The systems that do this are called Solar Power Plant (GES).

Solar power plants; Since it is a clean, easy to store and unlimited resource, solar energy systems are frequently used as an energy source today.

LBC Solar is an EPC company that supplies, installs and consults photovoltaic panel equipment with innovative technologies in the field of solar energy from renewable energy sources.